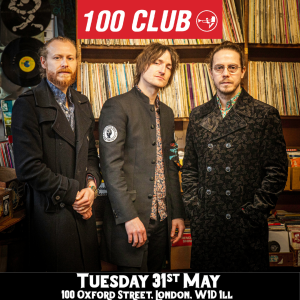 Blue Nation debut at the 100 Club in London on Tuesday 31st May!

London’s iconic 100 Club has been trading under the same name since 1964 and has put on live music since 1942 as the Feldman Jazz Club amongst other names, earning it the title of the oldest independent venue world wide.

Through out the decades the venue has championed all manors of ground breaking scenes including the blues of Muddy Waters and BB King as well as mod stylings of The Who and The Kinks in the 60s; the birth of punk with the Sex Pistols, The Clash and Siouxsie & The Banshees plus regular reggae sessions from Eddie Grant and The Mighty Diamonds in the 70s; the first ever Northern Soul All Nighter in the 80s; the indie explosion with early shows from Oasis and Suede in the 90s as well as key shows for artists such as The Horrors, Gallows and Kings Of Leon in the 00s.

The 100 Club also lends itself to comedy with special sold out performances from Simon Amstel, Adam Buxton and Stewart Lee.

(Tickets purchased will be posted to your billing address given at the time of booking.)